After the successful Winter School on “Literature in a Globalized World” in early 2017 at the Centre for English Studies Jawaharlal Nehru University (JNU), New Delhi, India, the Summer School on “Africa in a Globalized World” took place from 24 May to 30 May 2018 at the Department of English Literature at Julius-Maximilians-University, Würzburg, Germany. Six students from JNU and around 15 students from Würzburg participated in lectures and workshops given by six experts invited by co-organisers Prof. Saugata Bhaduri and Prof. Isabel Karremann.

The keynote lecture which opened the Summer School on Thursday evening was delivered by Prof. Frank Schulze-Engler from the Department of New Literatures and Cultures at the Goethe-University, Frankfurt am Main, Germany. His talk, as well as his workshop on day three of the Summer School, focussed on "Afrasian Imaginaries", exploring the relationships between Africa and Asia and how a decentred reading of world literature can be productive in the context of Globalization Studies. "Narrating migration" was the thematic core of the first day of workshops on Friday. Prof. Ralf Schneider from the Department of British Literature and Culture, University of Bielefeld, Germany, introduced the participants to the concept of constructing "transnational mental spaces" in British narratives of migration. This was followed by a workshop given by PD Dr Miriam Wallraven (JMU Würzburg) on Refugee Tales, a recent collection of short stories and poems representing the experiences of refugees, written by renowned British writers. Prof. Isabel Hofmeyr from the University of the Witwatersrand, Johannesburg, South Africa, who was also part of the Winter School at JNU, once again delivered the last keynote lecture, in which she introduced her current research on "object-oriented readings" of the colonial custom house. Similar to the workshop and lecture at JNU, the interplay of globalization studies and ecocritical studies was at the centre of her workshop in Würzburg, which explored the possibilities of black ecologies through the genre of Afrofuturism. The Summer School concluded with a drama workshop given by South African playwright and Professor of Theatre and Performance Studies at Edge Hill University, Liverpool, UK, David Peimer. Here the group was introduced to the specifics of South African theatre through the lens of Shakespeare adaptations and was given the opportunity to work with and perform parts of A Pound of Flesh: Shylock and Caliban Speak, a new play by Prof. Peimer which has not been publicly performed yet. 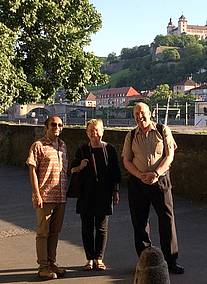 The academic contents of the Summer School were complemented by a day of sightseeing in Würzburg, which included a tour of the Würzburg Residence, a UNESCO world heritage site, a visit to the Würzburg Cathedral and the inevitable glass of Franconian wine on the Old Main Bridge. To conclude the Summer School, the group spent the last day at Würzburg’s 30th International Africa Festival, the oldest and largest festival for African music and culture in Europe.

By clicking 'OK' you are leaving the web sites of the Julius-Maximilians-Universität Würzburg and will be redirected to Facebook. For information on the collection and processing of data by Facebook, refer to the social network's data privacy statement.

By clicking 'OK' you are leaving the web sites of the Julius-Maximilians-Universität Würzburg and will be redirected to Twitter. For information on the collection and processing of data by Facebook, refer to the social network's data privacy statement.