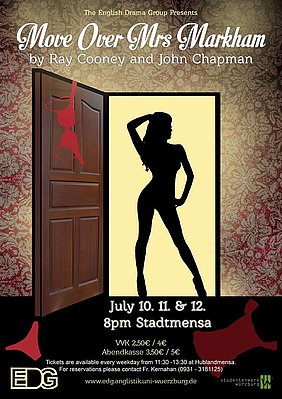 Tonight’s the night. In Ray Cooney and John Chapman’s play Move Over Mrs Markham, sex is not at all overrated. In a flat somewhere in London, Philip and Joanna Markham are getting ready for a night out. In their absence, Joanna’s friend, Linda, wants to use the flat for a bit of “rumpy pumpy” with an admirer while her husband, Henry, has similar intentions with a young woman who he has never seen before.
In the midst of this marital infidelity, Alistair Spenlow, a flamboyant interior designer, sets out to use the Markham’s night out for a quick game of “Who’s Your Daddy” with their Swiss au pair girl, Sylvie.
When the Markhams' evening out is canceled, it is too late to let any of the hopeful lovers know. All of them converge on the bedroom and all hell is let loose with lies and subterfuge galore.
Into this bedroom bedlam walks Olive Harriet Smythe a dotty, prim Norfolk dog owner and authoress of renowned children’s books which Philip and Henry would dearly love to publish. That’s when things really spiral out of control. The Markhams attempt to sign up Miss Smythe, while frantically trying to hide the amorous goings-on.

The performances will take place in the Stadtmensa, Studentenhaus at the University of Würzburg (Sanderring).

Tickets for each performance can be purchased from June 26 onwards. For ticket reservations please contact Karin Kernahan at the English Department by phone 0931 31-81125 or by E-mail at englsprachpraxis@uni-wuerzburg.de before July 10.

Please note that due to the sometimes racy content of the play we recommend that it is not suitable for students under 15 years old.

For further information about our production this semester or the English Drama Group, please contact me on 931 31-89496 or by E-mail at alexander.freuck@uni-wuerzburg.de
Alexander Freuck